I approach an empty canvas as though sketching out a landscape, but rather than depicting a scene, my attention is on the gestural character of lines and shapes, their rhythmic interactions, and the resonance of colors. A gesture gives rise to another gesture. A broad, wet smear of a rag is followed by a restrained, dry touch of a brush. Edges push together and pass through one another. Throughout this process, I aim for balanced and continual movement.

The white space in my paintings is absence inhabiting presence. Sometimes gently, sometimes jarringly, it interrupts and breaks through lines and shapes, itself becoming a form. The lines and shapes do not fully resolve into fixed things. Flowers or petals in the wind could just as easily be bits of sky. I am reminded of the heightened awareness I felt once when I noticed that an orchid by a window was the same color as the sunset. Contained in that awareness was a sense that there is no separation between things.


Read a longer essay about my process and philosophy 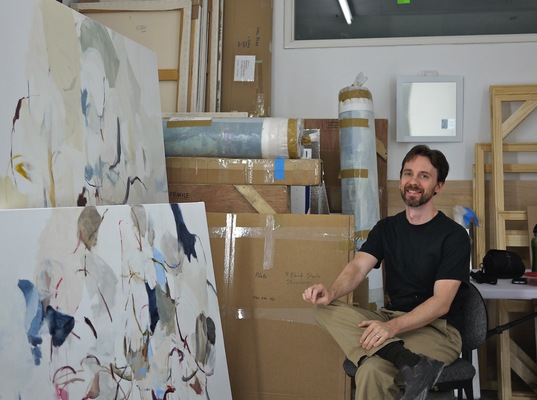